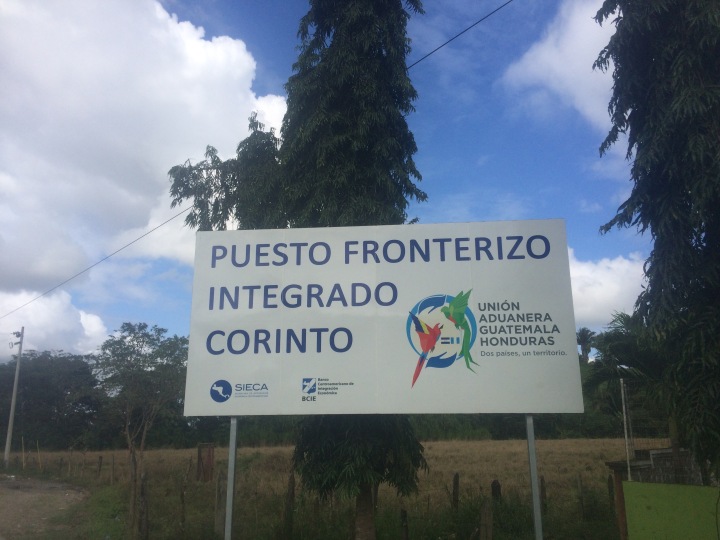 He wakes up to the sun rising over the Ulúa River valley, showers and puts on his electric company uniform. Gustavo’s breakfast routine is coffee, eggs with a hand-made tortilla and a copy of the newspaper, La Prensa.

He turns page after page of political strife of citizens with grievances over their current president. Like news outlets across the States, Honduras media is filled with the latest corrupt law or decree imposed by the president, Juan Orlando Hernandez. But unlike the papers of the States, La Prensa’s articles do not use the political demonstrations and murder rates in the capital Tegucigalpa as a way to negatively portray the people of Honduras. Gustavo puts down this paper, finishes his coffee and starts his commute to work.

The drive to the factory in San Pedro Sula from his hometown in the suburb Portrerillos contains hills of dense cloud forests and wide rivers flowing toward the Caribbean. Gustavo passes by fields of sugar cane gently blowing in the morning wind and arrives in the city amongst the other 600,000 inhabitants of the growing urban center.

Buses honk, motorcycles screech between the gaps in the traffic and the breeze from passing semi-trucks brushes the leaves off the trees that form the median of the Central American Route 5. The walls of the city are decorated with ‘Fuera JOH,’ and other activist phrases demanding liberty for their well-being of the people. Gustavo drives by the walls, and parks next to hundreds other electric company workers. He adjusts his clothes that got wrinkled in the drive over and clocks in. 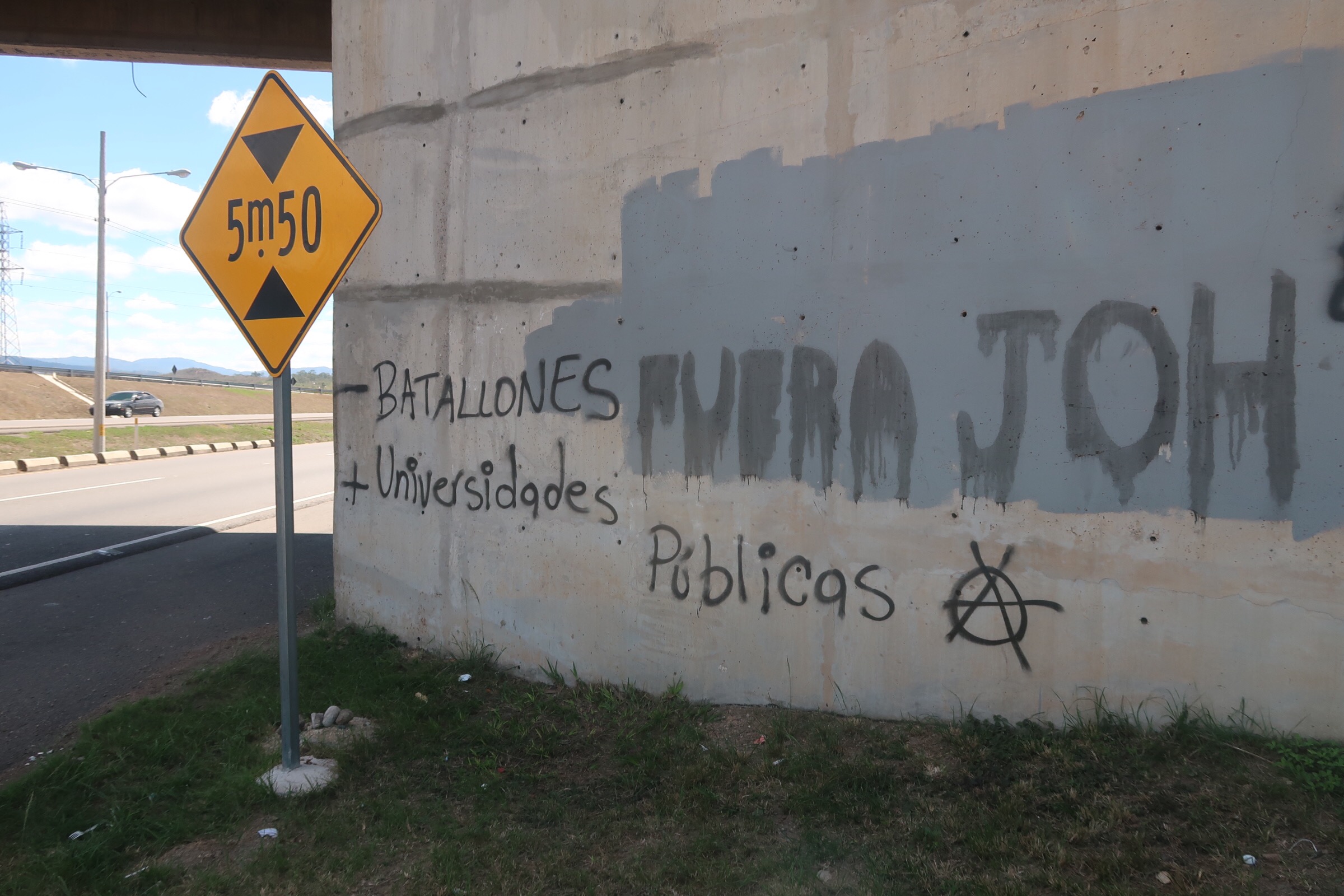 Four and a half hours later, the sweet relief of a lunch break, a fresh baleada and a conversation with his good friend Rodolfo, a local fisherman from Omoa. Both in their late forties, Gustavo and Rodolfo have seen the country of Honduras go through many changes, from the coup d’etat to agricultural growth and urban development. They share baleadas and talk about their days, their ex-wives and the current fruit season. They like to laugh. Rodolfo knows the history of Honduras like each tangle of his fish net, talking about his ancestors that sailed across the Atlantic to call this coast home and his parents that continue to put in an effort to make their family’s life more comfortable. Rodolfo tells Gustavo, “No lo hizo el mundo, pero trabajando para aumentarlo.”

On this lunch break, a release from his long day inside, Gustavo sits and admires the water’s flow. He and Rodolfo are joined by construction workers in need of a release from the heat. They ditch their boots and hard hats to take a jump in the river. Each of these men does ten or more hours of physical labor daily. As a break from the beaming tropical sun, they dive into the river in style. Jumping off a rock into a refreshing river is their special treat. For guys making 100 limpira a day, the equivalent of $4.31, they sure are happy to be where they are. The splashes of the water ripples back to the shore, and the men return to work. Gustavo to the electric factory, Rodolfo to the fish market, and the construction workers to the roadside.

After working the second half of his shift, Gustavo loosens his top buttons and breathes in the fresh evening air. He drives past the sugar cane fields and up the river valley back to his home in Portrerillos. He meets his neighbor Freddy for a post work beer and a much needed dinner, pollo con tajadas. They sit and enjoy the last hours of sunlight. Gustavo admires the clouds atop the Western hills as they turn from white to bright yellow and fade from orange to slight gray. Freddy has lived across the street from Gustavo for over ten years. This is their favorite time of day. Their small town gets even more tranquil knowing that their work is done and they have the time to enjoy time together.

Freddy is thankful to have Gustavo as a friend ever since he was deported back to Honduras for driving without a license. He still has a child and wife in Georgia that he is unable to see. Now he works everyday for a fraction of what he made doing the same farm job in another country. Gustavo tells Freddy about the subtleties he enjoys about the small riverside village. Enjoying the natural surroundings helped him recuperate after his wife passed in childbirth.

Just as it was about to get dark and the corner restaurant about to close, two strange looking men on bicycles roll down the street. Not accustomed to foreigners in this village, Gustavo and Freddy call the duo over. Covered in sweat and looking lost, the cyclist looked lost and Gustavo thought they could really use a beer and a fresh-cooked meal.

Very thankful for the offer after a day of riding, these cyclists enjoy sharing some R&R time with the local Hondurans. Gustavo, awestruck by the quantity of bananas eaten and kilometers travelled by these cyclists, decides to offer them a place to stay for the night. He sees this as a chance to make a good impression for his community.

After letting them safely secure their bicycles at his house and change out of sweat-coated bicycle clothes, Gustavo wants to show his new friends what his town is really like. The center of Portrerillos, where the two main roads intersect, is hosting the fair this week. Gustavo helps out his friends that work to put on rides for the town’s children, known as juegos mecánicos. Like the cycle tourists, these carnival workers are traveling the country. They shared stories of events on the road, and the best places to get a baleada, the classic Honduran breakfast. The juego mecánicos are a family, and quickly welcomed the cycle tourists into their group of misfit adventurers.

Sea After the fair and getting to show his new friends what a social event means to rural citizens, Gustavo calls Jose to get a ride. Jose, who goes by Boogy to everyone in town, is a mototaxi driver. Down a dirt road under the starry night sky of northern Honduras, Boogy drove Gustavo and the cyclists to a hot springs pool just out of town. He continuously cracked jokes and blasted his favorite music on their way to the hot springs, known as the aguas termales. The group spends hours at the rejuvenating spot. Boogie frequently cannonballs in, shouting “bomba!” and nearly draining the entire pool.

When he’s not splashing around or driving the mototaxi, Boogie works for the Red Cross. In San Pedro Sula, which barely gets any funding for this medical response unit, the volunteers sometimes have to pay for the gas in the ambulance. With a gallon of gas totaling 92, or $4, this is not an easy way to give back. He generously drives his friends around the town in his mototaxi, only accepting some breakfast in return.

Gustavo thanks Boogie for helping him show the cycle tourists around town as they climb back into the mototaxi and take the dirt road back home. And as they dry off from an hour soak in the natural hot springs, Gustavo hands the cycle tourist a hand crafted model boat his friend sent from Italy, saying “I always want you to remember this moment, and how great your time with the people of Honduras truly was.”

He wakes up to the sun rising over the Ulúa River valley, showers and puts on his electric company uniform. He wakes up his cycle touring guests to say goodbye and heads off to work hard for the bad reputation of being Honduran.

2 thoughts on “Working Hard For A Bad Reputation: Honduras”

Safe to say we are... delighted.
Passing off the torch to our bicycle brothers Matt and Mitch as they cycle from Cape Town to Johannesburg... Thanks @kaydenkleinhans for your inspiration and for showing us your playground and thanks @dancerer22 for joining our final ride and taking this epic shot! #capetowncycletour #capetown #locosciclos #bikelife #bicyclegang #mrtoadster #sendusfishoil
Day 186... We made it!!! From the Pyramids of Giza to the Cape of Good Hope, our final ride faced us with the full spectrum of emotions... In proper bicycle touring fashion!
10 countries, 1 billion centimeters, 180 days, 48kg of peanut butter, 7 different fake nutellas, 114 bikes donated to World Bicycle Relief, 25 flat tires, 30 nights slept at gas stations, 12 comments about how bad we smell, 14 showers taken 😉, 100 games of rock paper scissors, 1 ride on a cow taxi, 0 bribes paid, and an astonishing number of hills climbed later and the boys have made it to South Africa! We have four days of stunning coastal riding between us and our final destination, Cape Town. Here we go!
The triangle is the strongest shape. Epic day visiting the 2nd largest canyon in the world in Namibia! To all friends curious about our adventure; we are producing a full length film about our journey. We want your questions! The format of our film will be interview based, and we want the interview questions to come from you all. If you want to know anything about our journey, whether it is about the places we sleep, the gross things we eat, or if Quincy truly does talk about surfing in his sleep, comment a question below or submit it on this google form (LINK IN BIO!) https://forms.gle/kDtT5DBVKU1rubFz9.
Meet the Locos, Vol. 3
Loading Comments...
Comment
×
%d bloggers like this: