One of the most common questions that I get asked is: “How many flat tires have you had!?!?”

To which the obvious answer always follows: “Too many to count!”

But the truth is, there is a lot more to repairing a flat tire than simply patching a tube. Perhaps there are better ways to ask a cyclist about flat tires that would engage a more interesting response.

“Where was your most hectic flat tire?”

To which I would respond… “In the middle of an open street market in Cairo, about a kilometer away from the Pyramids of Giza, while trying to buy figs with about 200 honking cars and thousands of people funneling through a narrow street, getting bumped by people from every direction whilst running off of two hours of sleep. As I pulled off to the nearest alleyway to repair my puncture, I was approached by the generous Nasser who took us in to his home for our first home-cooked Egyptian meal, shared endless cups of tea and taught us about life in his country.”

“Where was your most frustrating flat tire?”

Without hesitation… “After waking up at 3AM in the middle of the street surrounded by bright lights and tailed by a police van, I embarked on a 300 kilometer self-supported crossing of the Sahara Desert. By 10AM I had completed 105 kilometers and the heat was rapidly increasing so I found some shade under an abandoned cement structure to rest under.

Two hours later, I ate my delicious pomegranate, hydrated, and mentally prepared to take on another section of dry desert. Right when I felt like I was in the zone and ready to ride, I began to roll my tires into the blazing sunlight. That was when I heard every cyclist’s least favorite sound… Psssssssssssssssssssssssssssss… Air escaping from my tires as fast as I had intended to be flying down the desert highway only moments before. A rushed patch job did me no good, and 60 kilometers later just as the sun was setting over the endless horizon I heard the oh-so-familiar and oh-so-dreaded sound… Psssssssssssssssssssssssssss… That was before Habib emerged from the only solid structure within miles that happened to be at the site of my flat tire and welcomed us in to provide shelter for the night after our longest ride of the journey.”

“Tell me about the flat tire you were most excited to inflate.”

This one is a no-brainer… “In the small Sudanese town of Abri along the banks of the Nile River I found myself pumping a flat tire on a bicycle that was not mine, and it is only fitting to set the scene prior to arriving to this brilliant moment. After my third consecutive night camping in the wild open Nubian Sahara Desert in Sudan, I was feeling rejuvenated and ready conquer the roads.

50 kilometers passed along enormous plateaus, regal volcanic mountains, and brutally scorched earth before turning the bend to see a never ending valley of dense greenery and palm trees walled on both sides by endless desert. The Nile River demands appreciation.

I pulled off the main road to enter Abri, a sand-dusted town consisting of modest and simple single-story stone structures and dirt roads. In search of anything cold, liquid, or sugary I rolled down the rocky road exuberantly responding to the countless smiles, ‘salamo alaykum’s, ‘hello mister’s, and barefoot children in school uniform running alongside me asking for handshakes as an old lady sitting on a rocking chair with her granddaughter on her lap motioned me to come to her shop where she had legendary iced hibiscus tea. As we sat outside drinking tea and sharing stories with the people of Abri, I suddenly heard squeals of laughter and joy. I turned and looked over my shoulder to see three boys between the ages of eight and twelve taking turns on a well-used bicycle. Naturally, I was stoked to see other two-wheelers enjoying their bicycle so I gave a thumbs up and yelled ‘agala!’ (the Arabic word for bicycle). A few minutes later the mini cyclists passed again and as I watched them roll by I noticed a significant wobble in the back end of the bike. Upon further inspection, I realized that they were sharing a bicycle with a severely deflated back tire, and I instantly realized I could provide the solution. They were intimidated as I approached them, but after a few goofy faces and smiles they began to laugh. I motioned them to follow me to Santana (my lovely bicycle) as I rummaged through my smelly gear to obtain my pump. By now they understood what I was doing and I could see their smiles starting to form in excitement. A few pumps of air and the back tire was in full-form. One child said ‘shokraan’, another said ‘thank you’, and the third said ‘mister’ and pointed to the dry rusted chain. I pulled out my chain lubricant, rotated the pedals as I added a few drops of oil, and handed them back their new and improved steed, fully inflated and greased up, and ready to fly. Words weren’t necessary for me to receive their thankfulness as I watched a cloud of dust form as one of the kids took off with the other two running behind yelling with excitement.” 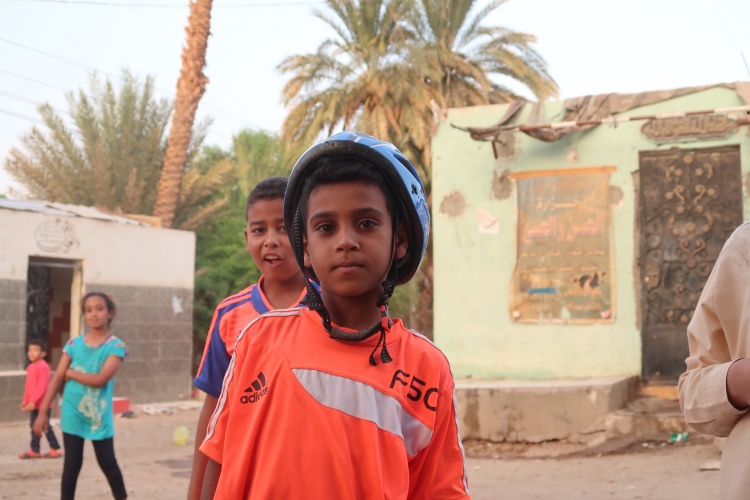 Flat tires… They seem to create a trail of magical moments, always unexpected and each one with its own special twist.